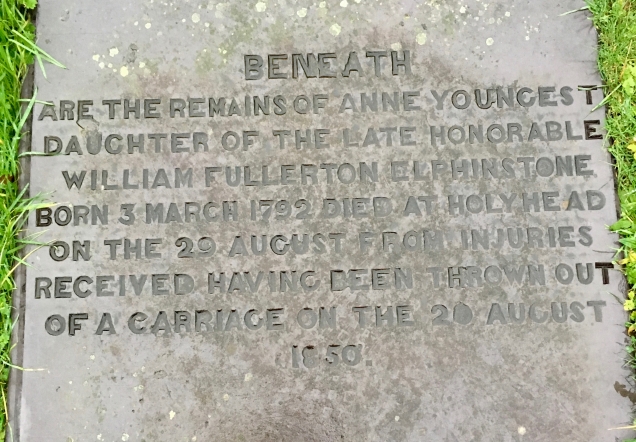 This gravestone marks the last resting place of Anne Elphinstone (1792 – 1850). Her grave can be found in the Lower Graveyard of St. Cybi’s Church, Holyhead. Her simple slate memorial now lays flat like many others around. The inscription tells us something of the circumstances of this lady’s demise.

Unmarried, she was the youngest daughter of the late Honourable William Fullerton Elphinstone (1740-1834). Previously a Chairman of the Honourable East India Company, he resided at Harley Street, London and was well connected to the Royal Family. Newspapers record Anne Elphinstone’s attendance at many social events, balls and gatherings where King William IV and later the young Queen Victoria were present.

Anne Elphinstone was the cousin of the 13th Lord Elphinstone and had six other siblings. Among them was Major-General William George Keith Elphinstone, who in 1842 led the tragic retreat from Kabul during the first Anglo-Afghan War that resulted in the massacre of many hundreds of British soldiers, native sepoys and camp followers.

Newspaper reports of the day record the sad details of this poor lady’s death. They tell that on the 20th August 1850 Anne Elphinstone was in the company of the Hon. William Owen Stanley of Penrhos, Holyhead and Lady Sarah Hay Williams of Bodelwyddan, a guest at Penrhos. Lady Sarah was the wife of Sir John Hay Williams. He was the brother of Elin Stanley, wife of the Hon. William Owen Stanley. In 1849 Sir John Hay Williams built Plas Rhianfa (now Chateau Rhianfa) on the banks of the Menai Straits as a present for his wife.

The group was returning by open carriage from an excursion to South Stack and was entering Holyhead by way of Summer Hill (Market Hill) when the two horses were affected by a wheelbarrow in the road causing them to bolt and to break the carriage pole. As a result the carriage struck the ‘Old Billiards Room’ (now where the National Westminster Bank building is situated) at speed throwing the occupants out. All suffered injuries but Anne Elphinstone was the most seriously hurt and was thought to have badly damaged her spine. She had been staying at the Royal Hotel, Holyhead (now Victoria Terrace) and died there at 6am on the 29th August 1850. She was aged 58.

Anne Elphinstone lived at 3 Chesham Place, Belgravia, London. Her father and other members of her family are buried at St. Marylebone Parish Church, London. In her will she required that if she died in London she should be buried with her family but if she died in the country then she should be buried at the nearest Churchyard. That explains why she was laid to rest at Holyhead in a simple grave. She left most of her estate to her brother Col. James Drummond Butler Elphinstone. This amounted to £6,000, equivalent to almost £800,000 today.

Follow Holyhead: Stories of a Port on WordPress.com
Join 127 other followers