The item in our collection and linked to the story is a Midshipman’s Poniard, given to junior officers in the Royal Netherlands Navy on their ‘passing out’ as officers. It is worn mainly on ceremonial occasions.

Following the invasion of the Netherlands by German forces in 1940, a number of vessels of the Dutch navy ended up at Holyhead. Initially, the Dutch mariners were looked upon by the local population with a degree of wariness. It wasn’t long before their fears were allayed, with families welcoming them into both their hearts and homes.

One such Holyhead family befriended a young Dutch student who had travelled to Holyhead from Manchester to join the Royal Netherlands Navy. Han Jordaan became a regular visitor to their house and began dating Evelyn, one of the daughters. Sadly the romance was short lived as Han was seconded to the S.O.E. (Special Operations Executive) before being parachuted into German occupied Amsterdam.

Jordaan was betrayed to the Gestapo after only five weeks.  After aggressive interrogation he was forced to transmit misinformation to his handler in the UK. However, using a special word he was able to alert his handler that his position had been compromised. Sadly Jordaan did not survive the war and died in a concentration camp three weeks before the cessation of hostilities.

Evelyn’s wartime story however did not end there. Several months later she met and fell in love with another Dutch mariner, Jan Christiaan van Aller. He had enrolled as a cadet in the Royal Netherlands Navy in 1939. On his passing out he was presented with his ceremonial poniard or dagger. Following further officer training at Falmouth, Van Aller was posted to Holyhead.

It was at a dance at the Station Hotel that the couple first met and soon became quite close.  At some point in time he transferred to the Marine corps and in January 1942 was promoted to the rank of Sub Lieutenant.

Once again Evelyn’s dreams were shattered when a month later he was posted to Jakarta in the Dutch East Indies. Before departing, the couple vowed they would write to each other and when the war was over he would return.  As a token of his feelings he gave Evelyn his poniard.

In February 1942 Singapore fell to the Japanese and his ship, SS Mentor, was diverted to Suriname in Dutch Guyana. As to where Van Aller ended his war years is unclear. However, due to the fact that the letters suddenly stopped arriving, Evelyn assumed he had been killed. She frequently reflected on ‘what might have been’ before she met her future husband George, whom she married in 1946.

In 2014, Evelyn donated the poniard to the Maritime Museum, a treasured reminder of a typical wartime romance that was not meant to be. 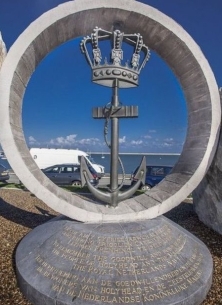 Contributed by Peter Scott Roberts and Graham Van Weert from conversations with Evelyn and her family.

This series of posts is to showcase items from the museum’s collection and to support the ‘Ports, Past and Present’ project that features and promotes five ports of the Irish Sea connecting Wales with Ireland – Rosslare, Dublin Port, Holyhead, Fishguard and Pembroke. More information here – https://portspastpresent.eu/

Holyhead Maritime Museum’s unique collection of historical artifacts help tell the story of the towns maritime heritage. Located outside the museum are two 18th Century ship’s cannon. The following is their story ……

The Irish sea had been plagued by pirates from the withdrawal of the Roman  legions from Britain in the fourth century.  Turkish, Moroccan, Irish, Viking, Spanish and French were among some of the vessels that plundered ships in these waters.  The following account illustrates how vulnerable and unprotected the town was three centuries ago from such threats.

One Saturday in the year 1710, a vessel flying English colours, sailed into Holyhead Bay, firing her guns to indicate that she was in distress.  In response, Maurice Owen, the local customs official, launched the Queen’s revenue cutter and proceeded to the vessel to investigate. Once aboard Owen quickly realised that they had been duped, for the ship was the French privateer ‘Fox’, with a crew of over 150 men and heavily armed.  After being stripped and interrogated about the town’s defences, the cutter’s crew were taken hostage and held to ransom.  The ‘Fox’ then proceeded to anchor off Borthwen Beach, close to Church Bay.

However, as if by divine intervention, a ferocious storm blew up, de-masting  the vessel, forcing her to jettison 14 of her large cannon to allow her to become more maneuverable.  This proved to be futile and despite firing her remaining smaller guns in distress, the town’s people, out of fear, chose not to come to their aid.  She was eventually driven on rocks somewhere between Borthwen and Penrhos point.  On the Sunday morning, seven boats took off the 150 pirates and released Maurice Owen.  Twenty of the pirates were sent to Dublin aboard the packet boat ‘James’ for trial.

The cannons remained on the seabed for over one hundred years before they were rediscovered by divers carrying out work for the construction of the Admiralty Pier. They were then stored until George IV visited Holyhead in 1821 and despite being heavily corroded were used to fire the royal salute. They were later relocated to the newly built Market building sometime in the late 1850’s until the Town Council took them into storage in the 1940’s. They were eventually presented to the Holyhead Maritime Museum for display in 1986.

This series of posts is to support the ‘Ports, Past and Present’ project that features and promotes five ports of the Irish Sea connecting Wales with Ireland – Rosslare, Dublin Port, Holyhead, Fishguard and Pembroke. More information here – https://portspastpresent.eu/