Jonathan Swift (1667-1745) was an Anglo-Irish satirist, essayist, political pamphleteer, poet and cleric who became Dean of St Patrick’s Cathedral, Dublin. He is probably best known for his book ‘Gulliver’s Travels‘, published in 1726. He would have passed through Holyhead many times in his lifetime. 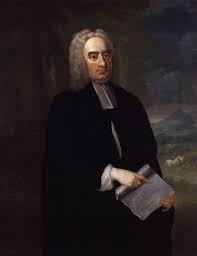 Jonathan Swift left Dublin on 9th April 1727 for a six-month visit to England. On his way back, he arrived in Holyhead on Sunday 24th September, just missed the packet boat, and had to stay in the town for a week because of storms. He stayed at the inn run by Mrs Welch, which was at the corner of present-day Thomas Street and Market Street and at the time just above the rocky sea-edge.

He wasn’t happy. Several of his initiatives in London had come to nothing. He was tired from his horse ride from Chester, and he was having bad dreams. He was suffering from recurring bouts of deafness and giddiness. He thought he didn’t have long to live, and made his first will. And he’d just heard of the dangerous illness of Stella, the name he used for the woman with whom he’d long been intimate. He was desperate to get back.

During his enforced stay, he had nothing to do, so he wrote bits and pieces in a notebook that came to be called his ‘Holyhead Journal’. The first page is a list of memoranda – things to be done before leaving England, such as buying ‘a pair of spectacles for [someone] 70 years old’. But most of the Journal consists of poems, such as the one that doesn’t paint a very nice picture of Holyhead at that time.

Lo here I sit at Holyhead
With muddy ale and mouldy bread
All Christian victuals stink of fish
I’m where my enemies would wish
Convict of lies is every sign,
The inn has not one drop of wine
I’m fasten’d both by wind and tide
I see the ship at anchor ride
The Captain swears the sea’s too rough
He has not passengers enough.
And thus the Dean is forc’d to stay
Till others come to help the pay
In Dublin they’d be glad to see
A packet though it brings in me.
They cannot say the winds are cross
Your politicians at a loss
For want of matter swears and frets,
Are forced to read the old gazettes.
I never was in haste before
To reach that slavish hateful shore
Before, I always found the wind
To me was most malicious kind
But now, the danger of a friend
On whom my fears and hopes depend
Absent from whom all climes are curst
With whom I’m happy in the worst
With rage impatient makes me wait
A passage to the land I hate.
Else, rather on this bleaky shore
Where loudest winds incessant roar
Where neither herb nor tree will thrive,
I’d go in freedom to my grave,
Than rule yon isle and be a slave.

He has nobody to talk to, because he doesn’t speak Welsh. He goes for walks along Rocky Coast – which in those days extended all the way round to the inner harbour – but has to fight against the rain. He walks to the top of the Mountain, but it was too hazy to see the Wicklow hills, and he gets soaked on his way down. A boat eventually sails, but meets another storm and has to turn back. He finally got away on the first day of October.

No wonder he penned such a gloomy poem. And yet, ten years later, he wrote a letter directing his executors to pay the cost of transporting his body to Holyhead ‘and for my Burial in the Church of that Town’. (He changed his mind later, and is now buried in Dublin.) And he writes, probably thinking of the happier times he’d passed through Holyhead on his way to England: ‘Here I could live with two or three friends in a warm house and good wine – much better than being a slave in Ireland’. Maybe it wasn’t such a bad place after all.

Follow Holyhead: Stories of a Port on WordPress.com
Join 130 other subscribers